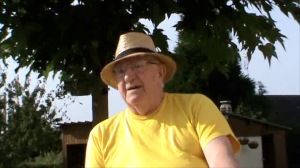 On 15th December 1960, the film Operation Crowflight was broadcast on ABV2 (Australian Broadcasting Corporation in Melbourne).

Terry Gallacher, who directed the film, gave an interview in September 2009, from his home in France, about the background, the filming and editing of the production and it’s reception at the time.

In the interview, Terry describes an exchange with Colonel McCaslin, where he asks the Colonel:

“Are you saying this is the first film that’s ever been made about the U2?”

Doctor John Grierson, who coined the term ‘documentary’ described the production when it was broadcast as part of his programme “This Wonderful World“:

“Just have a look at this for a piece of news-reel reporting. The story yes but also the heart of the story and no pains spared to make a job of it. I know we are very good at this sort of thing ourselves, both on ITV and BBC, but if the news boys are listening to me, let me tell them that this item was completed from beginning to end in nine hours. That’s what I call first rate reporting. The reporter was Gerald Lyons and the director Terry Gallacher and my complements to both of them.”

© Terence Gallacher and terencegallacher.com, 2020.  Unauthorised use and/or duplication of this material without express and written permission from this blog’s author and/or owner is strictly prohibited. Excerpts and links may be used, provided that full and clear credit is given to Terence Gallacher and terencegallacher.com with appropriate and specific direction to the original content.