In 1938, Robert Humphrey wrote an article called “Careers in the films”.   He wrote: The newsreel cameraman. (needs) a thick skin, indomitable push, and boundless ingenuity and resource to help him in tight corners in which he will inevitably find himself; and, most important of all, plenty of tact and patience to deal with all sorts of authorities, both reasonable and unreasonable … the ability to make a quick decision is essential, as also is a certain flair for what is of news interest”.

Today, we hear requests for the services of journalist-camera operators or Video Journalists, VJs or even Photo Journalists.

Oh how things have come full circle.  In the beginning, as Robert Humphrey wrote, we had cameramen who did it all, even making arrangements for their own travel and accommodation.  Journalists, that is those who considered themselves journalists but not cameraman or even film directors, did not appear on the film and newsreel screens for some sixty years after the birth of actualitié filming.

The Second World War was the heyday of the cameraman/journalist.  Paul Wyand, with his sound man Martin Gray, spent over a year filming the Italian Campaign.  They were obliged to make all arrangements concerning the condition of their camera car and any necessary repairs, sleeping accommodation, eating, shooting their stories and then shipping the film back to England.  What they did between Monte Cassino and Rome would have fully occupied the services of a production manager.  Every story required journalistic expertise to provide the right scenes.   For all their time in Italy, they were virtually cut off from their London headquarters.  They were on their own. 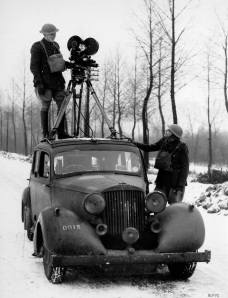 Jack Ramsden, a Movietone cameraman, went on raids with the U.S.A.A.F.  He had constructed a mount, to be attached to the aircraft, which enabled him to get the best shots during the actual raid.  The whole proceedings were written down in his “Dope Sheet”.  This was the true journalism.

In 1942, Alec Tozer, a Movietone cameraman, was based in Burma at the time of the Japanese invasion.  He arrived in Rangoon, in December  1941, during a bombing raid.   He had no transport, but he approached a Chinese General who issued him with a Willys Jeep.  In that he packed his tent, bedding, clothing, food and his equipment.  Over the next two months, he covered the evacuation of Rangoon and Mandalay, scenes on the battlefront in eastern Burma with the Chinese forces and stories inside China.  He drove hundreds of miles  sometimes spending the night in poor accommodation , or even sleeping on the ground under the stars.  When the Japanese advance forced him to leave Burma, he drove his Jeep over the Naga Mountains into India.  There was no known road over those mountains.

I have to say that I contributed to the use of the “presenter” in two films that I made for the Australian Broadcasting Commission.  In 1958, I directed a documentary on “The Fruit Flyer”, a train that picked up fruit and vegetables from Mildura and took them down to the market in Melbourne, 300 miles away, travelling through the night.

The film was for the Rural Department of the A.B.C. and the programme producer came from that department.   He was to be the voice-over, but the story lent itself to the inclusion of a few “links”.   The object was to show that John Muldoon knew what he was talking about because he was there.  These links only lasted a few seconds and it was never intended that he should dominate the programme with his face.

The second film was “Operation Crowflight”, a documentary about the work of an American U2 unit in Australia.   This film was made for the Talks Department of the A.B.C. and the talks officer was the legendary Gerald Lyons.   He appeared in front of the camera several times to set the scene.  He was also seen doing the interviews with the officers of the unit.  Once again, he did not dominate the scene and the audience were never deprived of pictures that contained important information.

I returned to England in January 1961 to find that both I.T.N. and B.B.C. were already using journalists in a dominant role in front of the camera.  This was in both news coverage as well as documentaries.   Programmes such as “Tonight” and “Panorama”, introduced in 1957, had begun to make celebrities of their presenter/journalists.  Prominent among these were Alan Wicker and Fyfe Robertson.   These, with a few others, are the exceptions, they possessed the mark of genius and behaved before the camera as if they had done so for all their working lives.  Many have tried to copy them, few have succeeded.

In the early sixties, the cameraman of United Press Movietone Television, around the world, were becoming involved in the shooting of war zones from the Congo to Vietnam.   Cameramen like Ib Heller, Ed Vankan and Jan Borg were regular contributors of articles to the United Press Wire Service.  They wrote about what they had witnessed.

Soon, in both the B.B.C. and I.T.N. journalists took over the reins and introduced their brand of presentation.  In the heyday of the newsreels, the cameraman was the camera operator, the production manager and the journalist all in one.  They would find their way to the location and shoot the film, producing a compact but complete visual story for presentation to the public.  Today, the camera operator only gets a mention in the rarest of cases.

I live in France, where, on French television news, whatever the channel, the entire team working on a news story are credited – every story.

The concept of the cameraman/editor is not new either.  When UPITN and Visnews (now Reuters TV) began using video cameras instead of film cameras, it was quite common for our crews based world-wide to shoot a story and then take it to the nearest television station.  There, they would supervise the editing of the story before it was sent by satellite to London and New York.

The displacement of the newsreel concept of visual storytelling was to be replaced by the journalist-orientated presentation of news which, at its worst, meant that pictures were produced on screen for the sole purpose of supporting a written commentary. This, instead of a commentary that explained the pictures. Even today, news clips are sometimes foreshortened in mid scene because there is no more commentary.  The last scene seems to be some kind of appendix, to be discarded at any point in its length upon the completion of the written commentary. The scoring of a goal is cut short before the ball reaches the net. The last scenes of an edited story is often cut before it finishes.  We are sometimes offered scenes which are a fraction of a second long because, for the sake of a couple of seconds, we have to get back to the face of the newsreader.

I like to believe that the way of the newsreels still persists among the camera operators who can still tell a story with their camera.