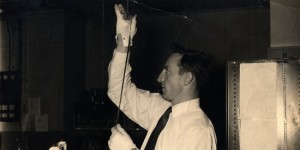 By the winter of 1957, I was editing most of the twice nightly news service, at GTV-9 in Melbourne, as well as the Focus documentary shown on a Sunday.

The early evening news would include around four or five stories that need complete editing while another three or four would need partial editing.   For the second news programme of the night, there would be an additional two or three stories to edit, stories that had taken place during the late afternoon or evening.   For some time, I was the only film editor in the studio.  My assistant had had no experience of editing and was in the process of learning.

At some stage I worked it out that every day, I was editing more “air-time” in one day than Sid Wiggins, Movietone’s Chief Editor (Cutter) did in three weeks. I was editing more than ninety minutes’ air time a week. It is possible that I was producing more air-time news, as a film editor, than anyone else on the planet.

Each week, I was contributing over two hours of material that was broadcast.  In January, I had been a film editor with no practical experience of a daily news service, or of 16mm film,  and by August, I was an accomplished editor with a huge quantity of air-time behind me.

The Focus programme was produced weekly.   It would be shot during the week and completed on Sunday morning for broadcast that night. The commentary writer was George Odgers.   George had been a writer with the Argus newspaper in Melbourne.   The paper intended to support GTV9 when it commenced broadcasting on January 19th 1957.   The newspaper was owned by the Mirror in England.  The Mirror sold the Argus to the Herald-Sun newspaper group in Melbourne (in January 1957) who immediately closed the paper down.   They themselves have establish the HSV7 television station in Melbourne.

George Odgers was out of a job and he came along to GTV to work on Focus as commentary writer.

George, as a commentary writer, had a habit of discussing the next programme, thinking up a favourite commentary line, writing it down on a small pad that he always carried with him, and then putting the slip of paper in his top pocket.  When it came to write the commentary he would pull out all the pieces of paper, lay them out across the desk and then pick the ones he could use.

From time to time, there were technical problems to be overcome in both the news service and Focus, relating to 16mm film.  In London it would have been possible to ask someone what to do.  There would be someone to phone for advice.  Now, I had nobody to ask. The only people I knew in Australia were Fox Movietone News in Sydney, but they were, like I had been, involved only in 35mm film. I could not even be seen to ask someone.  I had to work out the answer to all problems myself.  I also had to do this quickly so as not to let anyone know of my inexperience of 16mm film as used in television.  As the days went on, at the rate I was working, I was gaining the experience of years at Movietone, except that, there,  I would never have been given the opportunity.

After a while, after studying the subject of 16mm processing, printing and opticals,  any problems that arose I could solve myself.

Eventually, another programme was added to the list.  “Events of the Week” was an amalgam of the most outstanding news stories of the week.  But, it all required re-editing.

Eventually, my assistant was able to share some of the work and I could actually take two days off, each week.  When I left GTV, he took over the whole job.  I don’t now how long he had to wait for an assistant to join him.