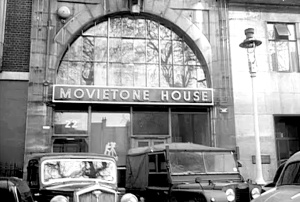 While we can access library footage from movietone.com, we cannot share the footage on this website as you need to register to view any clips.  Thankfully two pieces have been uploaded to youtube, from 1946 and 1958.  Both feature British Movietone News staff, probably for promotional purposes, in some cases it might be the only time Movietone staff have been captured on film.

The first clip is from 1946, filmed at 22 Soho Square, and while I joined Movietone in October 1945, I’m not in any clips as I was on National Service at the time.

The first series of shots is of Sir Gordon Craig, the Managing Director sat at his desk. The footage at 0.47 features Ted Adams, who was then News Editor and would later become Managing Director. The next clip at 0.51 shows Robert Gibbon, the General Manager who also presided over Movietone’s production of foreign language versions.  Gerald Sanger appears at 1.00, Gerald Fountaine Sanger was Movietone’s editor.  The next shot at 1.09 in the cutting room features Stan Wicken, Sound/Music Editor, Peter Whale and Raymond Perrin, film editors (cutters), then almost immediately a pan shot from Wicken, Whale and Perrin, then to cutter Sid Wiggins, followed by a series of close ups.  Chief Sound Engineer Pat Sunderland is pictured mixing at 1.41, followed by Movietone commentator Lionel Gamlin at the microphone reading a commentary at 1.46.

In the projection booth at 1.57 are George Evans and Albert Robson, followed by Lionel Tregellas and Patrick Wyand, sound engineers,  at 2.02 in the recording room.

Here are a few articles that explain how Movietone worked and the people who worked there:

British Movietonews – the process from idea to screen

The next film dates from 1958, again probably filmed for promotional purposes.

The first shot is of Len Waldorf with an Eymo camera, sound recordist George Evans appears at 0.34, probably just outside Movietone House at 22 Soho Square. At 1.02 Michael Samuelson is seen with a Newman Sinclair camera fitted with a 50″ lens, followed by David Samuelson at 1.23 with a Cameflex camera.  Cameraman Bob Turner appears with a Wall camera at 1.53 with Ken Hanshaw at 2.22 seen filming with a Newman Sinclair.  David Samuelson appears again at 2.46 on top of the Movietone camera car with a Wall camera followed by Bob Turner.

For some reason an old story from 1930 was tagged onto the end of these rushes, featuring a pan shot from commentator Eric Dunstan to Gerald Sanger at 2.46. At 2.58 there is a group shot of Movietone staff in front of a Movietone van, some of the staff include: Victor Mardon, Terry Cotter, Jack Cotter, Pat Sunderland, Tommy Scales, Gerald Sanger, Sid Wiggins, Raymond Perrin, Brian Saville, Stan Wicken and Cecil Burge.

Here are more articles featuring some of the names mentioned:

If anyone could put a name to some of the faces, please let us know in the comments.

Movietone now have their own Youtube channel with over six hundred stories from their library featured.

From: 1940s, 1950s, British Movietonews, Newsreels
← Colleagues: Bunny Hutchins – Movietone
At the Drive-in →
No comments yet