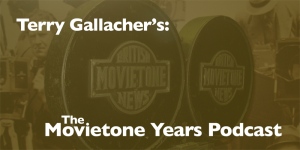 This week’s podcast recalls the career of Ron Collins from his early days at Paul Barralet Productions, joining Movietone, working with Norman Fisher as assistant cameraman before becoming a cameraman.

Ron would later go freelance, filming sport – which he was noted for and working alongside some of the world’s most accomplished directors. In 1969 Ron would form his company, the award winning Optex, building it into one of the major suppliers to the film industry.

The following articles relate to the subject of the podcast:

Click on the player below to listen to this week’s episode: