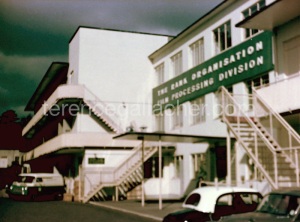 In the mid sixties, United Press and British Movietone News parted company from the enterprise known as UPMT.   This was the first British newsfilm agency based in London.  It commenced operations in June 1955.  Its first customer was the B.B.C.

One of the problems that beset the two companies was that they had different interests in terms of news coverage.  Movietone were producing a newsreel twice a week and, where possible, they chose stories that were interesting in terms of what was happening in front of the camera.  They were also aware that certain stories would not be suitable for the reel because of the delay in distribution.

The coming of daily broadcasts of television news opened up a whole range of events that could be filmed and broadcast the same day.

On the other hand, the United Press section, consisting largely of journalists, and would-be journalists, were issuing newsfilm around the world on a daily basis.

United Press had a senior journalist responsible for choosing their input.

He was quoted as saying that the people of Movietone did not always have a ”sense of newsworthiness”.

At this time, 1963, I was the only member of the staff of United Press Movietone Television who had worked in a television broadcasting station.

Movietone were often requested to shoot a “story” of the Prime Minister leaving Downing Street for the `House.  This would be on an occasion when he was expected to say something important. I would ask “What are they going to do with that in Australia in three or four days time ?”

In the unlikely event that the Australians wished to show their audience the story of the British Prime Minister, they could, immediately show a still of him or, if they were lucky, show a shot from the library of a previous departure of the P.M.  This they could do the same day.

Movietone often had to cover non stories assigned by the UPI journalist and they had to get out of them what they could.

Here is an anecdote of an amusing assignment that I can recall.  He came into my office in Denham to say that he wished to have film story shot at the “Caged Birds Show” at Olympia.  “There,” he said, “a man has a Mynah bird which says ‘Vive de Gaulle’. “I need a sync crew to cover it” (16mm sound on film camera).  Birds do not do “lip sync”, but hey ho !

I pointed out that it could be very wasteful of film to wait to get the required utterance.  I insisted that it should be done my way.  I sent a “sound” camera, but instructed the crew to film the bird while it was saying anything, and then to stand by with a quarter-inch tape recorder to record the required “Vive de Gaulle”.

Our crew ran the tape recorder.

The truth is that during the period in question I believe that no-one had totally figured out what was the best type of story to be distributed to clients around the world.  That would come later when representatives of the news agencies started to make visits to client broadcasters to ascertain their likes and dislikes, apart from trying to secure a renewed contract.

Indeed, it might even be said that the broadcasting clients, themselves, did not, in those early years, have a “sense of newsworthiness”. In Europe and Australia, it was newsreel people that were on hand to give advice or to actually work in the various television stations as they came on stream in the sixties.  The advice was not always taken.