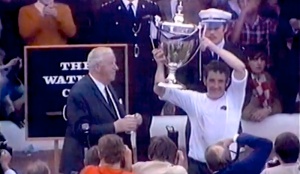 In the early seventies, I had been making small films for Watney Mann, when they asked me if I could film their football tournament, The Watney Cup.  This was an intriguing tournament which consisted of eight teams.

They started the tournament with a quarter final .

As usual, I had a limited budget, so I used two camera crews on the first round matches, three on each of the semi finals and five on the final.

At that time, it was usual for live football matches to be covered with only two cameras for television broadcast.   This is can be verified by viewing any archive telerecordings of the period.

We were asked to make a thirty minute film of the tournament and I thought it was essential that we did something different.  After my experience with the Cup Finals at Movietonews where I had also used five cameras (for the match itself) I felt justified in doing the same.

It was usual up to that time for two cameras placed side by side to film from a high position, usually in the grandstand, so that one could be filming while the other was re-loading.  However, we now had the advantage of being able to use the Cameflex camera.

The Cameflex was of French design and manufacture and was totally different from any other camera in that the shutter mechanism was in the magazine and not in the camera. The significance of this was that a pre-loaded magazine could be changed over in less that five seconds, so that if, at the end of a reel, it became time to change magazines, the cameraman would wait until the ball went out of play and then change magazines.

Now, we could film from the high central position with only one camera.

I placed a camera behind each goal and had two cameras raised above ground, each level with their respective penalty box lines.

Until this time, it was virtually impossible to recognise a footballer from the television coverage which was usual wide angle and remote.

Now, I could obtain full head close-ups of the players, to get their reaction to events around them.  I could obtain mid shots where we would see a few players vying for the ball.  These shots were intercut, in continuity, with the wider angled shots from the central camera.

There was another factor.  Hitherto, the editing of televised football matches, for the likes of “Match of the Day”, consisted of cutting the action when a ball went behind the goal line and cutting back to a goal kick taken some time later.  The advantage of this was that it could be done quickly, however, the disadvantage was that some interesting small incident could be left out.

Armed with my variety of shots, we could include the smallest, shortest incident and work it into the main story.  We left nothing out.  With adequate film, we never missed a goal, we even had adequate build-up to a goal.

I watched Spurs play Fulham when Jimmy Greaves was playing.  At one time, he received the ball when he was several yards offside.  He was standing roughly between the penalty area and the centre circle.  He placed the ball on the ground and passed it back to the Fulham goalkeeper who picked it up and booted it upfield.  Greaves had taken a free kick for Fulham.  When the highlights were shown on television, this incident was omitted.

The finished films that we made were a revelation to the Watney and Drybrough audiences who would attend their local tied pubs, in numbers, to see their favourites in action.

I needed good commentators and I decided to go for Brian Moore of London Week-end Television.  He agreed.  The following year, I used Barry Davies.

During the same period, we also made a film of the Drybrough Cup Final in Scotland.  This was sometimes played at Hampden Park.  There the commentator was Archie McPherson.

These commentators were famous and influential people and when they saw our edited version of a football match, they were astounded.

I am convinced that they returned to their respective organisations and pleaded for more cameras to be used in the coverage of football.  I would like to claim that I was the pioneer of multi-camera football coverage, but I cannot prove it.  All I can say is that one could see the difference between football coverage on television before and after the Watney Cup and the Drybrough Cup.

When the 1971 Watney tournament took place, it was decided to cancel the off-side rule for the duration.  Well, not entirely,  however, one could not be offside between the penalty areas.

I doubt that many of the spectators would have noticed the difference.  It might be that the teams had not made allowances for the temporary cancellation of off-side and played as if the rule was still in effect.

There is no doubt that if the rule was lifted permanently, teams would have a plan to make the most of it, then we would see a difference.   The final did produce a lot of goals.  Played at The Hawthorns between West Bromwich Albion and Colchester United, at the end of the match it was 4 – 4.  Colchester went on to win the cup on penalties.

We successfully did three Watney Cups and four Drybrough Cups between 1970 and 1974.