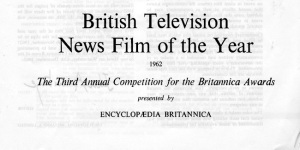 In the autumn of 1962, I was invited by Encyclopaedia Britannica to be a member of their jury on the EB Newsfilm Awards.   I went to a meeting at their head office to get a briefing and to see if, after the briefing, I still wanted to do it.  I agreed.

There were a variety of categories which included Hard news and Feature news.

It was here that Len Waldorf’s “Betting Shop” item came up for evaluation and, as was the habit, I kept out of the voting as an interested party.  Len took second prize.

Although it was amusing, there was a valid point to be made in terms of the preferences of the jury (as a whole) in that, in my opinion, they gave greater importance to the story than the cameraman’s achievement.

As an example, during my period of judgement, one story came up which illustrated the point.  It was the ill-fated record-breaking attempt by Donald Campbell to break the water-speed record.  All the camera crews, which included Movietonews, Pathe, BBC, ITN etc., were assigned to specific locations along the lakeside.

Right in front of them, Donald Campbell’s “Bluebird” became aerodynamic, it took off and then plunged back into the lake.  In those circumstances, any cameraman who missed it should have been fired.  What actually separated the entries was that the winner followed the craft as if he knew it was going to take off whereas the others were taken by surprise and momentarily lost sight of “Bluebird”.

Sometime in the sixties, a Panorama crew were working in Thailand.  They happened to be near the Royal Palace when two aircraft from the Thai Air Force came over and dropped bombs on the Palace.  When the aircraft came back for a second go, the crew shot the incident and sent the film to BBC news.  They won the award that year.  This illustrated my point, they were there by accident.  If they hadn’t filmed it, they should have been fired.  In fact many cameramen would have got some shots of the aftermath of the first attack.

It was very difficult to go for best cameraman when the subject was what intrigued my fellow jurists.

About this time, we in UPMT heard of one of our freelance cameramen in Africa set off to cover a story about a festival of a tribe in the bush.  The location was a few hundred miles from his base and over a rough landscape.

He reported that after a hundred miles, his car broke down and there was no garage around to fix it.  It took him several hours, using great ingenuity, to get the car going again.

He then ran into a rainstorm and had to stop to avoid being swept away.  He was delayed further by being stuck in the mud.  There were several other events that hindered his progress.  He finally arrived at his destination on foot, having walked the last eight miles.  The festivities were all over. The point of this story is that he arrived too late at the location to film anything.

I think that if he had filmed the event, however unimportant, he would be entitled to a prize for his endurance and determination.  I suppose we saw things in different ways.

We were suitably wined and dined by Encyclopaedia Britannica and eventually invited to attend the prize-giving which was usually held at a principal London Hotel.

On this occasion, as a reward for our services, we, the jurists, were presented with a copy of the Funk and Wagnell Language Dictionary plus a Year Book for 1961.

Fifty years later, my Funk and Wagnell’s has become dog-eared and well worn.  It has served me well in all that time. One of the Jurists said to the EB Public Relations man that he had a set of Encyclopaedia Britannica from the mid nineteenth century and he enquired what it might be worth.  The answer he got was a surprise to all of us when he was told that a full set would fetch very little.  Apparently when people got a copy, they held on to them and, therefore, there were a large number of sets in private hands which reduced their value.

He went on to say that in a brand new set, the cost of production of a single volume was only seven shillings and sixpence (37 pence).