How often have you heard someone tell you a story which starts with the phrase “you are not going to believe this…” ?

Well, you are not going to believe this:

The period : The Second World War.

Two Canadian RAF aircrew were flying home from a mission when they found it necessary to ditch their aircraft.  Walking away from the wreck of their aircraft, unscathed, and thinking that they were close to their Scottish air base, they saw a pub and decided to have a drink to celebrate their survival. They walked into the the saloon bar to find it packed with Germans. They were dressed in Nazi uniforms and were celebrating the birthday of one of their comrades.  The German shouted verbal abuse at the two Canadians and told them to “clear off and go to your own bar“.

They went into the Public Bar to find that it was crowded with allied military personnel.

The fact is they had landed close to The Curragh, a prisoner of war camp to the west of Dublin in the Irish Republic.

The occupants of the Saloon bar had been given special permission to wear their uniforms instead of “civvies”.

The camp, which had had military connections for over two hundred years, held, for want of a better word, around 100 Allied prisoners and 236 German prisoners.

On his arrival, the “rules” of the camp were given to him.  He would receive full service pay, he would have access to a radio and newspapers from home.  His laundry would be done.  After signing a parole document, he would be permitted to go out of camp, bicycle provided.  All that was asked was that they did not try to escape.

Roland Wolfe did escape. He made it into Northern Ireland, where he was arrested by the British and sent back to The Curragh.

Most of the Germans had arrived as a result of German Navy ships wrecked off the Irish coast or by damaged Luftwaffe aircraft coming down.

The German got themselves involved in gardening, constructing tennis courts, signing on at educational establishments, playing golf and going on fishing trips.  They dined well in Ireland where there was no restriction on the supply of fresh meat and vegetables, as well as duty-free alcohol.

Some of the British even brought their families over to be near them.  In 1943, the Allied prisoners were all sent home because de Valera thought that the Germans would lose the war. This unreal situation came about because of the obsessive requirement of the President of Eire, at that time, Eamonn de Valera, to maintain neutrality between the Allies and the Axis powers.  He was afraid that the Germans had plans to invade Ireland,first to gain access to the Atlantic Ports and to use the country as a stepping off point for the invasion of Great Britain.  The truth is that the Germans did have such plans.

In 1998, a feature film was made about the story of The Curragh and the prisoners of war.  It was called “The Brylcreem Boys” and it was slated for being “unbelieveable”.

The Irish requirement for neutrality affected the showing of films, but more on that later.

The story now turns to just one of the inmates at The Curragh.

George Fleischmann had arrived in Ireland on the 1st April 1941.  He was an Austrian born in Graz in 1912 and trained at the Berlin Film Academy.  He was a Flight Lieutenant in the German Luftwaffe on board a Heinkel 111 which had been involved in a bombing mission over Bristol and had been damaged by anti-aircraft fire.  They were unable to return to their base at Tours in France, so they decided to go on to the Republic.  The Heinkel 111 Bomber landed in Co. Waterford.  The crew destroyed the aircraft on the ground.  The crew was interned and spent the War in The Curragh, County Kildare.  It is also said that Fleischmann had with him a 35mm Arriflex camera, reserve lenses, tripod and magazines of unexposed film.  By 1944 Fleischmann was given parole from the Curragh to go to university in Dublin. A document exists, which is a 1944 invoice from a Dublin wine shop to a Flight Lieutenant Fleischmann requesting £4.10s for three bottles of amontillado sherry, two brown sherry, two Irish whiskey, one Scotch, four Sauternes and one bottle of gin.  Nowadays one could not buy one of those bottles for that money.

A He 111E in Luftwaffe service, 1940. The early variants had a conventional, stepped cockpit. (Photo credit: Wikipedia)

George Fleischmann was later a freelance cameraman based in Dublin.  He worked for Movietone and Pathe from the late forties until 1970.

About 1949, George made an appearance at Movietonews in Soho Square. He had sent rushes from Dublin to Soho Square to be processed by Kay’s (West End) Laboratories Ltd who shared the space at No. 22.

George was a large man with square jaw and thick black hair.  He had a sense of humour.

The rushes had been returned to him in Dublin where the material was edited.  He then arrived at Soho Square where, in the Movietone theatre, the edited story was re-recorded with fully scored track including commentary.  He brought his own commentator with him.  The commentator had to be Irish.

Later, George’s visits were to happen on a regular basis, until appropriate facilities became available in Dublin.

This activity was the result of decisions made in the Irish government after the War.

In researching this story, I came across an account of the situation in Ireland during the War when an extreme situation developed concerning censorship, all part of the neutrality mania.

The Government of Ireland would not allow the British Newsreels to include anything military or anything that might appear to favour one side against the other, i.e. the Allies versus The Axis.  As a result, all the newsreels were stopped showing in Ireland for the duration.

Then there was problems with feature films, all of which were produced outside of Ireland.  These too, had to be cleaned up to avoid favouring one side or the other.  Chaplin’s “The Great Dictator” was banned because the Irish authorities, that is the censorship board, believed it would cause riots in the cinema.

You couldn’t make this up.  You could not make any of this up.

Any feature film that had anything in it that seemed to favour one side or the other would have the offending scenes removed.  This led, we are told, to films being so deprived of content that the original plot disappeared.

After the War, it was decided that the Irish Government should actively seek the foundation of an Irish film industry. This, of course, necessitated a committee, a Cultural Relations Committee.

The book, “Cinema and Ireland” by Kevin Rockett, Luke Gibbons and John Hill recalls some of the proceedings:

Liam O’Leary, who was invited to join the committee, wrote an Advisory Report in 1949 in which he set out the case for funding of films.  The first film project of the Cultural Relations Committee, W.B. Yeats – a Tribute ((1950).  Scripted by John D. Sheridan, it was photographed by George Fleischmann and the sound was recorded by Peter Hunt.  These two latter names recur on documentary film credits throughout the post-war period.  Peter Hunt and his wife Iris came to Ireland from England and set up a sound recording studio in Dublin’s St. Stephen’s Green.

So, to start with, they were depending on foreigners.

On his release from internment he was re-united with his 35mm Arriflex camera and he began work on Irish short films.  It is indicative of the primitive state of film production in Ireland in the immediate post-war period that Fleischmann was the only person who possessed such equipment. 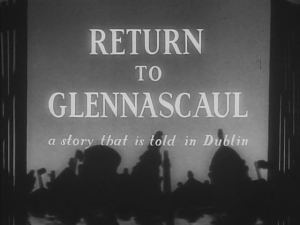 One has to suspect that George planned the whole trip, if he took his film equipment.  A camera on board, which was an Arriflex, I can understand, a tripod ?  That’s suspicious !

George Fleischmann worked, either as cameraman or Director, on a large number of Irish productions, all made for the Government. He filmed Orson Welles in the short film Return to Glennascaul (also known as Ghost Story) in 1951.

George is credited with working as a cameraman until 1988 on the production Natural Gas II, which he also directed when he was 76 years of age.

He was nicknamed “The Spy”, but no-one could say what he was supposed to be spying on.