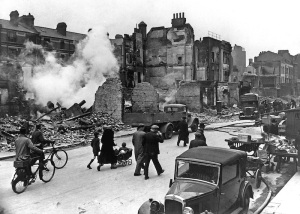 Jack Ramsden had been a Movietone cameraman since the early thirties. He was based in the north of England until around 1938 when he went to London. During the war, he became a uniformed war correspondent.

He filmed the London blitz in September 1940 (Movietone story “Battle Of London”). The following year, he was posted with the Royal Navy and filmed a number of stories concerning the convoys to Gibraltar and of Gibraltar itself. Raid On Vaagso – Image via Wikipedia

In December 1941 Ramsden went on the commando raid to Vaagso, filming for Movietone using a Newman Sinclair camera. Other coverage of the raid was done by an Army Film and Photographic Unit cameraman. Ramsden is quoted as saying that it was too heavy for a one-man job. Jack was carried to the location in a large warship, possibly a Cruiser but, when the Commandos went in, he was with them in the landing craft.

His footage includes the bombardment, the actual landing, running with the commandos through the town, the destruction of the great fish oil and fishery plants, the capture of German prisoners. The Commandos had 19 men killed and 47 wounded.

In 1943, Jack was in a Flying Fortress during a daylight raid over Rouen.

He had done a five-day course with the USAAF alongside other newsreel cameramen and journalists to familiarise themselves with flying conditions. The most notable of these was Walter Cronkite of United Press.

Jack can been seen in this famous wartime documentary, Cameramen At War (around five minutes in), suiting up and preparing his camera attached to the Flying Fortress, and filming the bombs being dropped on the rail depot at Rouen.

This is one of Jack’s dope sheets for his Rouen footage:

My previous mission having been cancelled, I decided to take the next one irrespective of the objective. This turned out to be the railway marshaling yards at Rouen. The formation was not as I would have wished and at the last minute I had to chance the whole of my equipment to another machine with a different crew, which is no picnic.

On reaching the target the bombardier was unable to give me warning until the bombs were actually released, and I had to find them on the way down, which is like looking for young Albert on August Bank Holiday.

After this I got one or two shots of part of the formation, in which some of the machines may be seen actually firing, but the whole of the fighter attacks were behind and out of range of the camera. On leaving the French coast a machine can be seen on fire in the sea with parachute nearby. I am unable to obtain confirmation as to wether this was a fortress or a fighter.

Later that year, he accompanied Winston Churchill to his conference in Cairo. Later he filmed the Teheran Conference attended by Churchill, Roosevelt and Stalin.

On D-Day, he was on board H.M.S Scorpion that was set the task of taking out the German shore batteries, while covering the landing craft as they approached the beaches. Working in other locations that day were five other newsreel cameramen: Alec Tozer of Movietone, Jock Gemmell of Pathe, John Turner of Gaumont, Richard Colwyn Wood of Universal and Jimmy Gemmell of Paramount.

Jack Ramsden is quoted as saying later “My pictures of the Airborne Division passing over in the late evening were some of the finest I have ever had the fortune to take”. What hurt him the most, however, was to find out that some of his best work on that day as well as later material shot in Cherbourg was withheld by the Censors.

All the cameramen engaged in the war were right up the front with the action and it is difficult to imagine that, when I recall “t’old lad” sitting in his office at Denham as Editor of Movietonews. He looked like he might be a banker or librarian. No-one would have guessed what he and his fellows had been through.

© Terence Gallacher and terencegallacher.com, 2011. Unauthorized use and/or duplication of this material without express and written permission from this blog’s author and/or owner is strictly prohibited. Excerpts and links may be used, provided that full and clear credit is given to Terence Gallacher and terencegallacher.com with appropriate and specific direction to the original content.