Frank Few was an accomplished cameraman or cinematographer.  He was on the staff of ABV2 when I arrived in 1958 and he was there when I left in 1961.

Frank Lowell Few was an American.  He said that he was from an “Oklahoma Indian” family.  Frank was a 38 year old in 1958 with swarthy, weather-beaten skin, a moustache and glasses.

He was a true American.  He had a great background as a cameraman.  He told me that he had been one of the combat cameramen who shot the American landing on Guadalcanal in the Pacific during World War Two.

Recently discovered truth reveals that he was a principal player in the ill-fated Goettge Patrol. Platoon Sgt. Frank Few was one of three survivors (along with Cpl Joseph Spaulding and Sgt Arndt) of twenty-five marines who were lured into a vicious Japanese crossfire only one hour after he, and the others, had landed on the island. 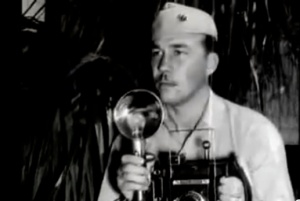 He fought his way out of the firefight and, as the last man standing, he swam four miles in shark-infested waters to get back to American lines.  He was awarded the Navy Cross.

During the Korean War he was a photographer for the first ever Marine Corps Combat Art Team deployed in 1950. After the war, he had worked for Disney doing a lot of wildlife work.  At this he was an ace.   He became Disney’s Australian representative and contributed movie material to the Disney television programme in 1956.

He must have joined the Australian Broadcasting Commission in Melbourne shortly afterwards.

He had an amusing turn of phrase for almost every occasion:

“He’s hotter than a two-dollar pistol”.  “Useless as teats on a boar hog”.

Few is an unusual name and I asked him how his family got it.  After all, the American Indians, as they used to be called, would have had such names as “Sitting Bull”, “Crazy Horse”, various types of cloud and other animal names.

He said that his family were on a reservation and the government agent was a Scotsman named McFew.  When a census was conducted in the U.S.A. the counting team arrived at the reservation, realised that they were going to be confronted by all these strange names, so they decided to name them all after the agent.  Frank said they also realised that it would be stupid to have a Mac in front of the name of a American Indian, so they called them all Few. Phew!! 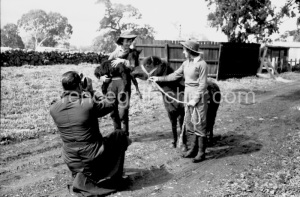 I worked many times with Frank and we produced some first class films, including an interview with Tommy Steele, the film on The Fruit Flyer and Ceres – God Of Harvest and a film on Arab Stallions.  On one occasion, we drove into the back of beyond to meet up with a helicopter which was to take us up for some aerial photography.  On arrival, the pilot asked us to sign a waiver in case of accident.  Frank said “What are you going to do with the paper when we’ve signed”.   The pilot said “I’ll keep it”.  In that case, said Frank “We will not sign, if we do go down, the piece of paper will go down with us and if we don’t go down, the paper will be worthless, so keep your piece of paper”.

For several years, Frank kept in his back garden a glass enclosure in which a colony of Bull ants had been introduced.  Frank was filming their activities in the hope that he could sell the film to Disney.  Bull ants, native of Australia, are about half an inch long and very aggressive.  Frank was able to film their activity through the glass.  One could see the passageways and tunnels and feverish activity of the ants.

Frank told me a story that I have been unable to verify elsewhere but it sounds too ridiculous to be fiction.  He said that his grandfather was a Deputy Sheriff.  Once a month, his grandfather would ride off to some remote spot where he would meet up with Geronimo, the former leader of the Chiricahua people.   Frank said that Geronimo never had more than seventeen braves in his renegade group.

Old man Few was carrying Geronimo’s state pension.  Who could believe that Geronimo ended up with a state pension ?  The Chief and the Deputy would then go to the nearest town and blow the lot on drink.  There was enough pension to allow them to get totally drunk and incapable.  The locals would leave them outside to recover before being able to make their way home.

The next month they would do it all over again.

It has to be true, you could not make it up.

Frank Few filming for the "Fruit Flyer" flim for ABV2

Frank was the cameraman on a number of successful productions made by the ABC in Melbourne and was principal creator, director and co-scriptwriter (with his wife Betty) on the Alcheringa Series.

“Alcheringa” was the aboriginal word which meant “people of the dreamtime” and referred to their ancient ancestors.

In the early 60’s, with his wife Betty, they had written three books called “The Boomerang Maker”, “The Axe Maker” and “The Fire Maker”, all related to the Alcheringa Series, Frank’s photographs illustrated the books.

For more articles in the Colleagues series click here.