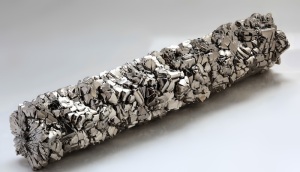 In September 1966, I went off to Paris.  We had been commissioned by the Titanium Metals Corporation of America to record a conversation between the President of the Corporation and Professor William J. Kroll, who had devised the extraction process for titanium.Part of the conversation was to talk about how Dr. Kroll went about discovering the extraction process.The conversation was expected to last an hour, but, for me, the problem was that neither of the two men had any experience of speaking in front of a camera.

The location for the filming was the Plaza Athenée, 25 Avenue Montaigne, Paris. The Hotel provided us with a conference room as a temporary studio.

The camera crews were from the Paris Bureau, Paul Badin and Julian Botras on camera with Jacques Chaudensen supervising the sound recording.

Both men seemed quite anxious about the prospect of speaking in front of a camera for an hour.  I left them to talk between themselves while we set up.  I found that their conversation was about families and houses.  I did not want them to say anything before the shoot which would cause them to say during the shoot “I have already told you about that…” I decided to use two cameras running together one camera on each subject.  If they made a mistake, all they had to do was to start the sentence again and the editor would remove the mistake without anyone noticing.  As the conversation was likely to be extensive, I decided that the cameras would be equipped with 1,200 foot magazines.  These would allow for over thirty minutes of continuous shooting.

I was very difficult to find such magazines in France, but we had plenty of notice of the job and eventually Henri Brzoska, head of our Bureau in Paris, found them.

The two men spoke for half and hour and then took a break while we re-loaded with another 1,200 feet of film.  They re-started and finished before we ran out of film a second time.  For us it was a triumph.  We knew that we had achieved something special.

The film was sent to The Titanium Metal Corporation of America in Denver, Colorado.

They were somewhat amazed at our filming and the ability to be able to edit the perfect conversation.  We even provided them with close-ups of hands, listening and re-action, but in truth it was all there in the multi-camera shoot.

I wonder if they still have that interview in their archives?