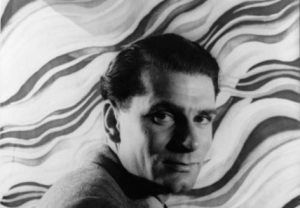 Movietonews were invited to film the newly-built Chichester Festival Theatre.  It was set in open country near Chichester and it’s first director was to be Sir Laurence Olivier.

We went to shoot the building, before it was completed, so that we did not get involved with the activity of opening day.

When I arrived there I found a lovely camera position.  It was up a bit of a hill where we could get a shot of a hedgerow and five-barred gate with the theatre, in the background, down below.

A few weeks before shooting, I had come up with a mad idea and I told it to my boss, Paul Wyand.  I thought we might ask Sir Laurence Olivier to say a few words into the camera while standing in front of the new building. Paul said “You must be bloody mad… (pause)…but have a go anyway”.

I found out who his agent was and telephoned. A lady answered the phone and when she heard what I had to say, she said she would ask and call me back.   Incredibly, he agreed.   When we met up at Chichester, he asked me what we wanted him to say.  I said that he might say something about the Theatre, where he was to become Director.  After that to say what he liked.

He talked of his job in the Theatre and how he would like our audience to all go and see his first production there.  It was a wonderful performance, the best “piece to camera” I have seen.

However, the foregoing is not the point of the story, it is only the background.  We shot the film in 35mm. The UPMT television news service would take edited Movietone stories and have them reduced to 16mm.  They did not, however, take the sound track, preferring to send out the story mute.

The UPMT editor would do a new shot-list of the Movietone story.  In the case of the Chichester Festival Theatre, when he got to the five-barred gate scene he famously wrote “Some Guy leaning on a fence”.  Some guy, one of the greatest actors of all time.

The shot list would have been sent to the clients.  Somehow, it summed up the difference between United Press and Movietonews.