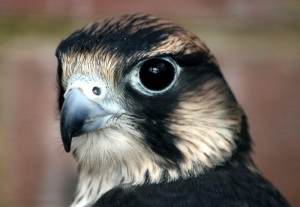 The Ministry of Information in Abu Dhabi asked UPITN to make a major documentary on the subject of Falcons.  The Arabs are famous falconers and had been known to pay around $100,000 for a Peregrine.

In the deserts of the Emirates, the prey of the falcon was a bustard type bird called a Hubbarah.  The bird was an easy prey, it was cumbersome and was not used to lengthy flight, but almost bounced along, flying a few yards before grounding and walking a while before taking off again.  One assumes that the bird was edible, otherwise, what’s the point.

In any case, the bird had been, to all intents and purposes, hunted to extinction in Abu Dhabi, so that at this time, Sheik Zayed would travel with a considerable entourage to south-west Pakistan where there was a plentiful supply of such birds.

I engaged Stan Joseph to help, he, in turn, introduced John Gooders, an ornithologist who published The World Of Birds magazine and later contributed to Anglia TV’s Survival series, to work with us as researcher and writer.  Ron Grainer would write the music. It was edited at Dandelion Films.  Our English Commentator would be Duncan Carse, the actor and explorer.

I had a considerable job, first researching what we would need and then finding ways and means of filming those scenes or obtaining them from libraries.

We had to send a crew in to the south of Pakistan to film the Sheik and his party hunting with falcons.  The cameraman was Mohammed Badr.

We would need to go back to Abu Dhabi to shoot the local scenes concerning falcons.

Cameraman Tony Mander and I got the required material when next we went to Abu Dhabi on location.

We found a location at Glastonbury where the Falconry Centre was being run by Phillip Glasier.

Because we were in the wrong season, we had to find material on hatching in the wild from a library source.

We also heard of the fame of Morlan Nelson who raised Eagles in Boise, Idaho.

One of the first locations for us was Glastonbury.  I went as director and took John Barnard, a freelance who hailed from Sydney.

Off we went to Glastonbury.  There we met Phillip Glasier at the The Falconry Centre.  He kept a scruffy office in a house that also looked scruffy.  He and his wife looked like latter day hippies.  However, they were both charming people.

The Falconry Centre consisted of his large house, outbuildings which housed hatcheries and cages for birds and an avenue of logs on which individual falcons rested, held on by their jessies.

He explained to us his ideas about breeding falcons.  He explained the phenomenon or photo genesis by which the newly hatched chick would accept as “mother” the first face it saw.

We filmed his breeding methods and he provided us with several birds to be filmed in their daily flying exercises.  One was a Sea Eagle, another was a Peregrine. We got some wonderful shots of the birds performing.

He told us that in the stoop (the dive toward the prey), the birds could reach speeds of 168 miles an hour.  As we walked back to the house from the flying area, we passed the avenue of logs on each one of which there was a falcon.  A whole variety of small and large falcons.  They were all jumping up and down as we passed.  I enquired what the fuss was all about.  Philip said “They are saying ‘my turn’, they all want to fly now, they enjoy it so much”.

I sent Stan Joseph up to Scotland to film a Goshawk in action on the Scottish moors.  He worked with Charles Lagus. There the bird would be hunting rabbit.  It was astonishing because we were able to see a falcon working in conjunction with two dogs.  The dogs were Pointers and by them pointing towards the target, the falcon knew where to search.

We gathered good pictures from Pakistan where we followed the Abu Dhabi falconers, including Sheik Zayed.

It was late November before Tony and I returned to Abu Dhabi, where we were able to film falconry as practised by the locals.

John Gooders busied himself searching the world’s libraries for material that we could not shoot ourselves.

We found Morlan Nelson of Boise, (pronounced by the locals as boysee) Idaho.  We used our man in New York, Roy Berke, as contact.  Morlan, when speaking directly to me, referred to Roy as Mr. Berkee.  It must have been an Idaho thing.

Morlan was well known to Hollywood and the Television production companies in the U.S.  He supplied tame birds for the film industry.  He had trained a huge Eagle to be a falcon.  We filmed Morlan with his Eagle as they hunted rabbits. (The eagle never caught one during our shoot)

We had enough good film to produce an excellent one hour programme.  It went into considerable detail about the variety of birds, their breeding and their use in various parts of the world.  Of course, we heavily featured the material we had obtained in both Pakistan and Abu Dhabi.

We were thoroughly satisfied with the film and sent it off to Abu Dhabi for the première showing.

The 45 minute film was premiered in Abu Dhabi to an enthusiastic audience and Peter Hellyer, who happened to be there at the time, took the plaudits on our behalf.