When I was in the army, I used to come home each week-end from Bicester in Oxfordshire and, on the Saturday afternoon, I would play football for Gothic Football Club.  The team was supposed to be the works football team of the Gothic Works which had produced gas meters for many years and also produced gas cookers.  However, they did not have enough volunteers from within their ranks to make up a football team, so that, usually, my brother Don and I would turn out for them.

To get to the playing pitch, I used to get a bus to Cheshunt and walk to Theobald’s Park.  It was in the Park that the football pitch was laid out.  As one entered the Park, one was faced with the formidable London gatehouse of Temple Bar.

This had been designed by Sir Christopher Wren and replaced a gate burnt down in the fire of London.   Heads of traitors were spiked on the top from time to time.  During the Victorian Period when traffic grew at an enormous rate, it was decided to take down the edifice of Temple Bar and remove it.  It was purchased by Sir Henry Meux of the brewing family.  He owned the Palace in Theobald’s Park and his wife took a fancy to the Temple Bar edifice.  It was therefore dismantled and re-erected in Theobald’s Park where, at the opening ceremony, royalty and VIP’s attended.

In the early seventies, people were complaining about the deterioration of the Temple Bar and its security and future became the focus point for the Temple Bar Trust that was formed in 1976.  The chairman was Sir Hugh Wontner, who had been a Lord Mayor of London.  One of his aids was a young barrister named Timothy Tyndale Daniel who approached us about making a film designed to raise funds to purchase the building and have it re-erected in the City of London.

We talked it over in the Cosmas our local hostelry in Goodge Street, London.  Timothy was a very entertaining person.  He lived in Charterhouse near Smithfield where his lodgings probably dated from the 16th century.  Derek Shepherd, my colleague at UPITN, and I visited him there several times during the making of the film.

After hearing what he wanted, I outlined the film for him and he approved.  I got Stan Joseph to work on the film and Tony Mander as cameraman.  During the making of the film two extraordinary thing happened. First, Tony went to shoot an interview with Sir Hugh Wontner,  Before doing so, he collected his sound camera from Samuelson’s Service Department where it had been lodged for a service, including putting the lens on the collimator to verify its accuracy of focus. When we screened the footage, it was found to be out of focus, this on a camera where the focus was made through the viewing eyepiece.  The equivalent of a single-lens reflex. This could not possibly be down to Tony, he being a top-class cameraman.  What was odd was that the same afternoon, of his morning  shoot with Sir Hugh, he went off on another job with the same camera and, he told us, that coverage, for someone else, was fine.  The camera was checked, again, at Samuelson’s and found to be in perfect working order.  Weird !

With great difficulty, we got permission from Guildhall to shoot some of their prints of Temple Bar and the City of London which were on display at the Guildhall Museum. Tony went along with an Arriflex camera and filmed a whole series of prints.

When we received the film for viewing, we were confronted by another problem.  Each scene was about four feet long.  However, after about two feet into every shot, the picture became under exposed.  There is no known reason that this could happen in a movie camera.

Once again Tony, the following day, before he knew the results of the Guildhall shoot, used the same camera on another job and this turned out O.K.

We were obliged to go back to the Guildhall and ask for another go at their prints.  They were not amused.

This time we got enough material on each print to use, but there was still a problem which always remained unexplained.  Even more weird.

Timothy Tyndale Daniel went off to the United States seeking subscriptions from the American bar.  He eventually became a member of the American Bar Association and was able to practice in both countries.

We Interviewed Lord Denning, Master of the Rolls, who spoke about “Equity” and the role it plays in both British and American law.  This was to show the Americans that Temple Bar was part of their heritage as well as ours.  He was very keen on the project and performed for us like a professional.

We filmed the Temple Bar edifice in situ at Theobald’s Park and also filmed the original site in Fleet Street.  It had been removed to make way for the Law Courts and I always thought that the gatehouse should have gone back to near where they got it from and let the traffic queue up to pass through it.  There are a number of examples of similar structures still in place in Europe where traffic flow takes second preference to an ancient arch.

However, from the outset, the Temple Bar Trust made it clear that they would not even ask for it to be re-built on the original site or even close to it.  In fact, they did not seem to have much of an idea as to where it might be re-located..

When the film was finished, Timothy went off to the States again, taking the film to show to his audiences on his grand tour to raise money.  He was very successful.

Sir Hugh Wontner thought that Timothy was too pushy which might put potential donors off.  Timothy thought that they would have to be pushy to get the sort of money they were seeking. 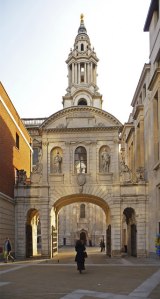 Much of the above occurred between 1976 and 1980, after which we heard nothing.  The occasional article in the London newspapers stopped appearing and everything went silent.

It was quite a surprise for me to discover that, in 2004, the rebuilt Temple Bar was opened at St. Paul’s as an entrance to Paternoster Square.  Twenty eight years after the formation of the Temple Bar Trust and long after the death of Sir Hugh Wontner in 1992.

Apropos of nothing, Sir Hugh’s father, Arthur Wontner,  played Sherlock Holmes in four films made in the 1930s while Sir Hugh became owner of the Savoy Hotel.

I would like to think that we had  played our part in the re-location of Temple Bar.

© Terence Gallacher and terencegallacher.com, 2010. Unauthorized use and/or duplication of this material without express and written permission from this blog’s author and/or owner is strictly prohibited. Excerpts and links may be used, provided that full and clear credit is given to Terence Gallacher and terencegallacher.com with appropriate and specific direction to the original content.